Can I win my speeding ticket case if I ask for a bench trial? 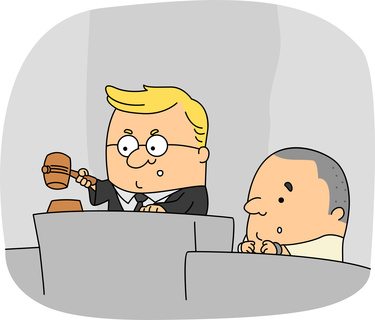 Lots of folks want to know:
” Can I win my speeding ticket case if I ask for a bench trial (no jury, just a trial to the judge) and testify before the judge that the cop was wrong and I simply wasn't speeding?”
I mean, I was looking right at my speedometer when I saw the cop (and when he saw me) so I just know I wasn't speeding!” Well, I certainly understand how you feel. You were looking right at your speedo and rely on it every day you drive to give you reliable information, right? I mean, YOU KNOW it's ACCURATE, right? Why can't you just get up in court and say that and win the case? Well, perhaps you can, but even so, a win might not be very likely. Here's how it might go:

The Cop as a Witness: Experience and Training Go a Long Way in the Courtroom

If you wanted to have a short bench trial on your speeding ticket, which is your right, first the prosecutor (District Attorney) would call his (the State's) witness to the stand to testify against you. Usually in a speeding ticket case, the witness for the State (and usually the only witness) is the cop who pulled you over and gave you the speeding ticket). Now the DA, or prosecutor, is going to ask that cop a bunch of questions, see? The first few questions are going to be about the cop's pedigree and qualifications. They'll be questions like “How are you employed?” “How long have you been a Highway Patrol Officer?” “How many speeding tickets have you written?” “Have you had any special training in estimating the speed of cars or other motor vehicles?” Etc etc.  All these questions are designed to elicit answers that show the judge this guy is a fine upstanding law enforcement officer who has had a bunch of experience and training as a cop AND as a cop who has written a lot of tickets.
The second batch of questions is gonna be a bunch of questions about how the cop observed you and where he was relative to your position when he first saw you and all that stuff. Those questions are designed to show the cop was in a position to get a good view of your car and wasn't distracted by other stuff going on around him etc. The DA will then probably throw in a few questions about the cop's radar unit and whether it had been calibrated recently and if the cop had any training to use it and whether he a had a certificate of his training that was current etc. Finally, the DA will at some point will ask the cop questions about his estimate of your speed. And here's the crucial part. Nowhere in NC law is it written (not anywhere) that the cop HAS TO USE A RADAR OR OTHER SPEED-MEASURING DEVICE IN ORDER TO HAVE AN OPINION OF YOUR SPEED. Let me say it again: RADAR OR OTHER SPEED-MEASURING EQUIPMENT IS NOT NECESSARY FOR THE DA TO PROSECUTE YOU FOR SPEEDING. What is necessary is plain old opinion evidence, and the cop has plenty of that, coupled with all of his many years of experience and special training in determining vehicle speed simply by looking and observing. See why all those questions the DA asked him are important? Right! So why bother with the radar at all you ask? Well, even though the cop need only testify about his experience and his estimate of your speed, according to NC statutory law, evidence of how fast his radar gun said you were going CAN BE USED to corroborate his visual estimate. So what we have is kind of a double whammy against you: 1) The cop has had special training in visual speed estimation AND 2) he also has a radar gun that can be used to measure your speed and BOLSTER/CORROBORATE his testimony. OUCH!

You as a Witness: No Special Training or Experience, And No Calibrated Equipment

But wait! You haven't even testified yet. Now you get on the stand. What are you gonna say? Well, are you a cop? No? Well, have you had any special training in visual vehicle speed estimation? No problem. The law says you can offer “lay” (non-expert) testimony in certain cases. But the cop had a radar to corroborate his opinion. Well then, how do you corroborate your own estimate of your speed? By your speedometer? Well that's fine, but unfortunately while NC statutory law has a certain exception carved out for radar speed-measuring devices when they are used properly and calibrated appropriately, there is no such statutory exception for a car's speedometer. Ok, let's give you the benefit of the doubt. Maybe the judge will let you testify to what your speedometer said. The DA will still ask you on cross examination: when was it last calibrated? Never? Don't know? Hum. Not so good.  See how this is shaping up?

Bottom Line: It's an Uphill Battle

The cop (contrary to popular belief) does not—in NC anyhow—need a radar gun or any such thing in order to render an opinion of your speed. His opinion is all that is necessary to write you a ticket and is all that's necessary to present as evidence in court against you. Moreover, it's not just anybody's opinion. Nosirree. He's been a cop since God was a private and has had all sorts of special cop-training in visual speed estimation. That alone is enough! But to seal the deal, by statute in NC, if he does happen to have a radar gun, the results of the radar can be admitted to CORROBORATE his opinion.
You on the other hand are not a cop, have not had special visual speed-esitmate training, and have only a lay-person's opinion of how fast you were going (which is kind of interested and self-serving testimony, so the DA will say…) perhaps corroborated by the same car's speedometer which has never been calibrated. May be hard to get past that….

So…Can These Cases Ever Be Won?

Well, yes. Aside from all the cool things that an experienced trial lawyer can do to cast doubt on the cop's “opinion” (waaaaaay too much to go into here) remember, with a bench trial the judge sits as the jury and determines what he will believe and what he will not believe. Issues of credibility are always in play. I've seen cases where the cop answered all the right questions in all the right ways and the judge still found the defendant (speeder) not guilty. Just comes down to who the judge thinks is more credible, and that is never a simple function of who has the training and special toys and who doesn't. Sometimes there's the “other” justification: like where the sweet little old lady who has never had a ticket in her life gets popped for going 20 over the limit. She probably was speeding 20 over—as the cop says—but because she is a sweet little old lady, the judge “looks the other way” and finds her not guilty.  Or where the distracted soccer mom is driving to pick up her son and is going just a wee bit too fast. Same deal, the judge as finder of fact simply chooses to pick the woman's side over the cop's. He doesn't have to give a reason, he's the judge! Call it credibility or just “judicial discretion” this kind of stuff is still very much in play in NC District court and not quantifiable in the least.

Moral of the Story

Speeding cases are relatively straightforward. Looked at in terms of the evidence that's required the defendant (ticketed driver) often has the cards stacked against him in a trial. But don't despair! Remember, the judge is the final arbiter of fact and if he sees a compelling reason to find you not guilty, no matter what the cop and his radar might say, not guilty is always an option. Of course, to explore that kind of option, you'd better get yourself lawyered up. A man who acts as his own lawyer has a fool for a client! That's what Bernie Sez!