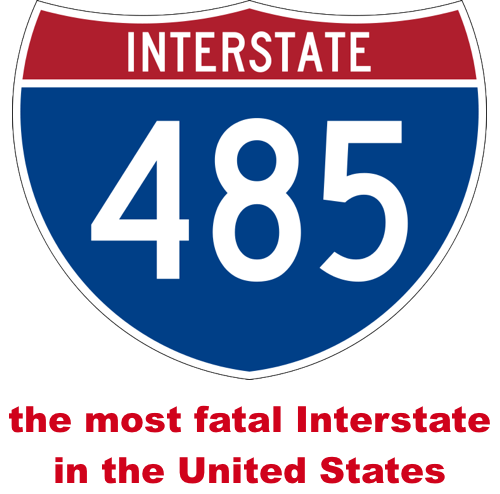 Buckle up. Drive safe. Be careful.

We've all heard this advice from friends and family as we get in our cars and drive away. While these adages may be so commonplace that most of us don't give them a second thought, that is still some damn good advice to keep in mind as we drive. And this advice is especially good if you are driving around Atlanta, Georgia. That's because Georgia has reported the fifth highest increase in vehicular deaths in recent years, and that rate is twice the national average. [The Atlanta Journal-Constitution]

In 2016, 1,500 people died in motor vehicle accidents in Georgia, predominately caused by speeding, drinking while driving, and distracted driving. No big surprise there. The interstate that surrounds Georgia's capital of Atlanta, Interstate 285, holds the dubious distinction of being the most fatal Interstate in the United States. WTF! That makes driving around Atlanta one hell of a risk!

Overall, the state is ranked the seventh-worst in the U.S. for fatal car accidents. So if you live in Georgia, and especially Atlanta, or are just traveling in these areas, then you need to know that you are more at risk for a serious automobile accident than you may realize. If you are unfortunate enough to be involved in a car wreck and suffer a personal injury, here's what you need to know.

The four factors involved in a personal injury claim in Georgia

Some of the most common types of accidents that result in personal injury claims involve auto accidents. But not all injuries from a car wreck meet the requirements to file a personal injury claim in Georgia. To file a claim after an accident, you’ll need to be able to establish the following four factors:

Duty of care – A duty of care is the legal responsibility of another driver to avoid any behaviors that could reasonably be foreseen to cause harm to you or others. Examples would be some jerk cutting you off in traffic or some other irresponsible and dangerous behavior.

Breach of duty – When you file a claim for personal injury, you’ll also have to show that the other party intentionally acted in a way that somehow breached their duty of care. Examples would be a drunk driver or some asshole kid going too fast in his new Mustang. This breach of duty is commonly called negligence.

Causation – Next, you’ll have to prove that the other driver's negligence was the specific cause of your injuries. Establishing a breach of duty or negligence is not enough to receive damages. There must also be a direct cause-and-effect between specific injuries and specific negligence.

In any personal injury case, one of the most critical elements that affect how damages are awarded is proving the degree of negligence. Georgia is one of 12 states that currently use the Modified Comparative Fault rule. This means that a driver who is found to be more than 50 percent at fault for the car accident can't file a personal injury suit against the other driver for any amount of damages. If you were 49 percent or less at fault for a car accident, you are eligible to recover damages.

It's important to know that how much you are found to be at fault will directly affect the amount of damages you can recover. The other driver's attorney will do everything they can to find evidence to increase your share of negligence. You will also have to contend with the insurer of the other driver doing their best to find this type of evidence as well. This determination of who is at fault and by how much will involve witnesses, expert testimony and other parts of the investigation.

In Georgia, your percentage of fault reduces the amount of damages you can recover by a 1:1 ratio. So, if the court determines that you were 30 percent at fault, this determination reduces the amount you can recover by 30 percent. The amount you recover in a personal injury case could affect you for the rest of your life. So this comparative negligence element is one that requires the skill and experience of a good personal injury attorney to ensure that you get the compensation you deserve.

Statute of limitations and types of damages in Georgia

In the state of Georgia, a time limit, or a “statute of limitations”, applies to personal injury cases that result from automobile accidents. You have two years from the date of the accident to file a personal injury suit in court. For personal injury claims related to an accident involving a county or city-owned vehicle, you only have six months to file a lawsuit.

Georgia is not one of those bullshit “no-fault” states, so you can sue the other driver for all losses. These losses include medical expenses, lost wages, pain and suffering, and any other financial losses directly resulting from the car accident. The damages you can recover in Georgia for personal injury fall into three categories:

Economic Damages – Economic damages are pretty easy to determine because they involve financial losses that can be measured in dollars. These include the following:

Non-economic Damages – These types of damages are more difficult to calculate than economic damages because they involve things like “loss of consortium,” “pain and suffering,” and other factors that can't be measured. These intangibles are why non-economic damage awards can vary so greatly. In many ways, the amount of compensation is a result of opinions, rather than hard facts.

In essence, your future well being is determined by how much each juror thinks a potentially debilitating injury will affect you in the future, how much weight they attribute to your ability to recover, and many other factors based on their opinion. The final outcome involves some often complicated calculations involving degree of injuries, multipliers, professional opinions and even per-diems related to your earning capacity.

Punitive Damages – Punitive damages in Georgia are designed to punish the offending driver for behavior that is considered reckless or highly irresponsible. These damages are rarely awarded and are capped by law at $250,000. Since these awards are meant as a punishment for the offending driver, and not as an award for the injured driver, 75% of these awards are paid to the state treasury. Sounds like bullshit to us too! Punitive damages must also be sought in the initial suit to be considered.

Hopefully, all this newfound knowledge will never come in handy. But if you are injured in an auto accident in Georgia, you can be confident that you at least know what to expect if you file a personal injury lawsuit. So buckle your ass up and stay safe!