How Do Personal Injury Laws Work in Washington? 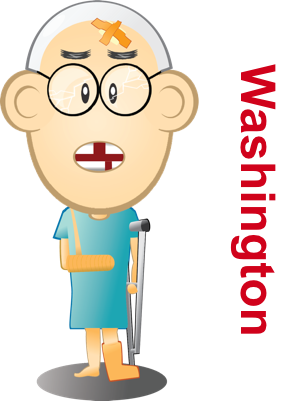 Can't always blame an accident on the rain…

A lot of us probably think of rain when we think of Washington. And we all know that rain and other adverse weather can cause car wrecks. But it looks like Washington gets a bad rap when it comes to their climate. Seattle gets its share of rain throughout the year, but the city comes in at a pretty dry number 44 among major U.S. Cities. Even Miami, Florida gets more rain than Seattle. So while there are plenty of other vehicle accident causes in Washington, you can't always blame it on the rain.

Even without the over-hyped rainy weather, Washington still has their fair share of auto accidents. From the rugged coastline along the Pacific to the Cascade Mountains, the beautiful scenery can be distracting for drivers. Its common for drivers to get caught with their eyes off the road and that creates a higher risk of car crashes, especially on those long, winding roads. When these unfortunate wrecks happen, there can often be personal injuries. So its good to know what to expect before something happens.

Now, the good news! Whether it's an attempt to balance out the lack of punitive damages awards, or some other reason, in Washington, there is no monetary limit to personal injury awards. Washington courts have determined that personal injury damage caps are unconstitutional. This determination means that victims who are injured in an automobile accident can recover damages without financial limitations, but the laws are quite detailed when it comes to what kind of damages can be compensated.

In other news…In Washington, economic and non-economic damages are determined by specific laws:

Before a victim gets to the stage where compensation is considered, who is at fault and how much at fault they are has to be determined.

While Washington typically doesn't award punitive damages, the state does follow a rule of law regarding negligence. Negligence is the failure of someone to exercise an expected degree of care, resulting in personal injury to someone else. That's some pretty vague verbiage that doesn't lend itself to objective interpretation. So how do the courts determine negligence? There are a lot of laws regarding personal injury and a lot of different takes on what they all mean. But two of the most critical factors are Contributory Fault and Elements of a Negligence Claim.

Most state negligence laws are very similar and based on common law, but they often differ regarding fault. In Washington, contributory fault (how much each party is to blame) decreases in relevance to the degree of damages, but still allows recovery of compensation. Here's an example: If the injured party is awarded total compensation of $100,000, but the court finds that the defendant is only 70% at fault, then the injured party will receive $70,000.

Elements of a negligence claim

To determine who is at fault, and to what degree, in a personal injury case, a plaintiff must prove five things.

The fine print, (aka… hurry while supplies last!)

While three years may seem like a long time, a personal injury lawyer has a lot of research to do and needs plenty of time to create a strategy for a successful case. (You did remember to get a good attorney, didn't you?) Not to mention the immediate financial losses and physical and mental pain and suffering. Do you really want to wait three years to get your life back on track?

Other, very detailed, laws regarding personal injury in Washington should convince most plaintiffs to contact a good personal injury lawyer, at least to act as an interpreter!

So there you have it, the “ins and outs” of personal injury law in Washington. Hopefully, you will never be a victim of personal injury in a car accident or a plaintiff in a personal injury case. But if you do find yourself involved in one of these cases, at least you have an idea of what to expect. If you don't remember anything else, remember that your shot at compensation is truly a “limited time offer.”

You'll also have a heads-up on some of the more vague, “subjective” statutes in Washington regarding personal injury. So enjoy the scenery, drive carefully, and remember that an experienced personal injury attorney can help interpret all those rules and get you the compensation you deserve.

Click/tap the button below and we will hook you up.