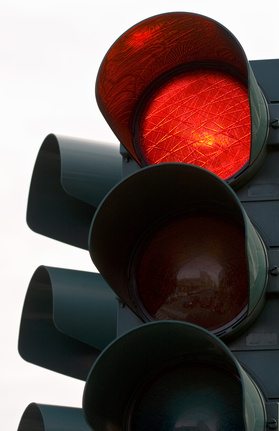 Running a Red Light on a Motorcycle

A client calls me the other day to talk about his red-light ticket. Seems he was driving his motorcycle late at night and was stopped at a red light. There was NO traffic in any direction. He sits at the light for what seems like forever, and waits some more.  More.

More still.  Finally, he's lost his patience, looks left, right, and left again (as they teach us in driving school), and pulls away through the still-red traffic signal.  (As an aside, I am all but certain the bike he was riding was a small displacement bike and not a full dress Harley FL.  Simply wasn't enough metal to set off the sensors in the roadway at the traffic light).

Well, what do you know, there's one of Raleigh's finest sitting over there in the shadows.  On with the blue lights.  Out with the license, it's ticket time.

So we're on the phone discussing all this. The first thing my client wants to know is if there are insurance consequences if he just pays the ticket.  Well, yes, I said, certainly.  If it's a moving violation (which it is) and it's not a simple 9-over speeding ticket (which it isn't), then there will be insurance consequences if you plead guilty or are found responsible.  So he says to me “how about one of those “prayerful judgments”? Won't that keep it off his insurance he wants to know.  Well, yes, but let's get the name right first.

What this chap was referring to is actually called a “Prayer for Judgment Continued” or “PJC” for short. Here in the great state of North Carolina, the PJC is the discretionary relief that judges can grant in order that the consequences which would ordinarily follow after a finding of “guilty”or “responsible” do not occur. Despite its name, it really has nothing to do with prayer (at least in the sacred sense). The “prayer” which is included in “PJC” actually is an old legal term meaning “appeal” or “request”. The rest, the “judgment continued” part is precisely that: “Judgment” is the court's verdict, or “finding”, and the “continued” part means, well, continued. Put it all together and what you have is a petition (a request) that the court's judgment (verdict) be continued. But until when?

Two basic senses here: In the first, the PJC is granted (and judgment is continued) ad infinitum (which is Latin for forever). That is to say, if the court allows that judgment be continued, unless the court specifies some set of circumstances on the occurrence of which judgment must be entered, it is presumed that judgment will NEVER be entered (but will be “continued” forever). This is the “best” of the uses of the PJC since it means that the judge has decided not to enter a judgment against the petitioner and, as such, there can be no “punishment” in the usual sense of the word.

In the second use of the PJC, the court specifies a certain event, or occurrence, or nonoccurrence of events, or date perhaps, which will trigger the end of the “continuation” of the judgment's toll (the period when it is not entered). The triggering event would mean the state (the DA, that is) could “pray” (petition) that judgment be entered at that time.

An example that comes to mind readily is what they call substantial assistance. Here in NC, if you are busted for a big-time offense (usually drug trafficking) the State (the DA) may offer you a deal such that if you agree to plead to certain offenses, and then “help” nab other bigger fish (by “substantially assisting the state”) then the judge may, at sentencing, take this into account and give you a better deal than if you were to simply plead guilty. The PJC comes in when the judge receives the guilty plea but ELECTS (with a nod from the DA) to “continue” the matter and not impose judgment WHILE the defendant is out there ratting out the other drug dealers.

Back to Our Red-Light Ticket

Let's get back to the red light ticket. Though motorcycle dude got the name wrong, he was on the right track. The PJC is useful in any criminal case or infraction (like a red light ticket), which is really like a junior grade criminal offense. It allows the judge to use his or her discretion to “withhold” the punishment-containing “judgment” where it seems that to do so would further the ends of justice. With regard to traffic offenses generally, the PJC is quite useful. According to the SDIP (discussed in a previous article), a PJC which is allowed in a traffic case that is reported to the DMV will have the effect of knocking out the associated license points AND insurance points for a given offense.

Thus, our friend on the motorcycle, while not able to avail himself of the “one speeding ticket every three years” rule (because it was not in fact a speeding ticket but instead a red light ticket) nevertheless COULD ask that the judge continue judgment in the matter.  According to the SDIP, a PJC then will have essentially the same effect as have the matter dismissed entirely: there will be no license or insurance points assigned.

Only One PJC Per Household Every 3 Years

But here's the rub: while the judge may be willing to grant a PJC on an offense, the DMV in North Carolina keeps tally of the PJCs which are granted and will not allow the intended effect (cancellation of insurance or license points) to obtain where there is more than one used “per household” in a three-year stretch. That is to say, if you have a red light ticket and wish to use a PJC, it will not have its desired effect if someone else in your “household” has been granted that relief in the same span of three years. To complicate things, there is a “two-in-five” provision also such that two PJCs will be allowed in any period of five years BUT the effect of knocking out insurance points does not hold. Instead, the PJCs merely prevent the underlying offenses from being used to cause more license revocation.

So, In Plain English, What Does PJC Mean?

Bottom line is this: If you, like the motorcycle guy above, have a simple moving violation in NC and, because it's not a speeding ticket, you cannot take advantage of the “one every three years” rule that applies to low-speed simple speeding tickets.   And if you have had a ticket within the previous three years and are for that reason ineligible for the “one in three” waiver of insurance points, the PJC is just what the doctor ordered.  Only don't call it a prayerful judgment.  Separation of Church and State you know…